If waking up at 5:15 the previous day hadn’t been early enough, my dad and I woke up even earlier at 5:00 the following day to head out early for our first hike in Sedona (as well as first hike on our road trip). Due to just how busy the Red Rock State Park is with tourists, it was imperative to leave as early as possible in order to beat the crowds– which meant heading out by 5:45 to get to the trailhead and begin our hike. We would be starting the day with the hike to Devil’s Bridge, an iconic site for the state park itself.

To access the trailheads to Devil’s Bridge, there are several options: if you have a 4×4, you can literally just park at the Devil’s Bridge Trailhead and hike only a mile over. Otherwise, if you’re coming in a non-4×4, you’ll have to park either at the Dry Creek Trailhead or the Mescal Trailhead. Most visitors choose to park at the former, as it’s the first trailhead to be reached on the drive over– however, the trail’s pretty dusty and boring, at 2.3 miles one-way to reach the Devil’s Bridge. My dad and I opted to park at the Mescal Trailhead, which would offer a more-scenic walk over, and it was a tad shorter at 2.1 miles one-way. It really does make a difference!

There were perhaps three other cars at the Mescal parking lot when we pulled in just a bit after 6:00. The sun still hadn’t come out yet, and it was a chilly early morning as we began our hike. The sky started to turn light quickly after starting, however, and we were soon warmed up while walking through the wooded path and admiring the red rocks in the distance. 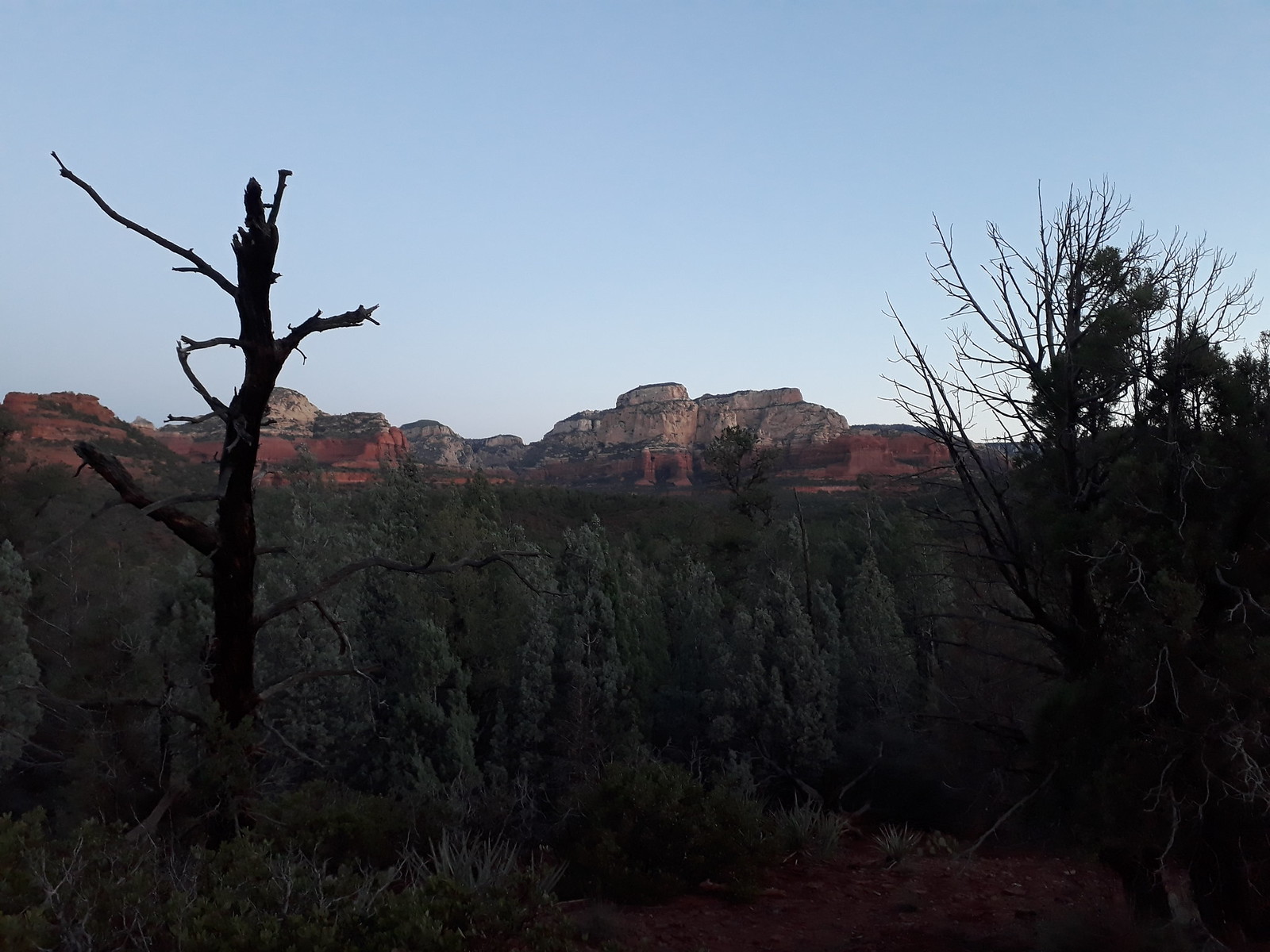 We didn’t encounter another soul until we got to the Devil’s Bridge Trailhead a mile or so later. The path, which had been flat and easy at first, quickly turned challenging as we began the incline to the top where the bridge was located. There were some really steeped parts that required us to use our hands to climb up, and soon enough, we reached the Devil’s Bridge! Despite arriving at 6:45, there were already at least five groups waiting in line to take photos on the platform (including some Instagram models). My dad and I got our chance after 15-20 minutes. Honestly, the bridge isn’t as treacherous as it looks, as it’s actually fairly wide at seemingly the most-narrow point– as long as you’re not doing cartwheels and otherwise goofing off, you’re not going to fall off the bridge! 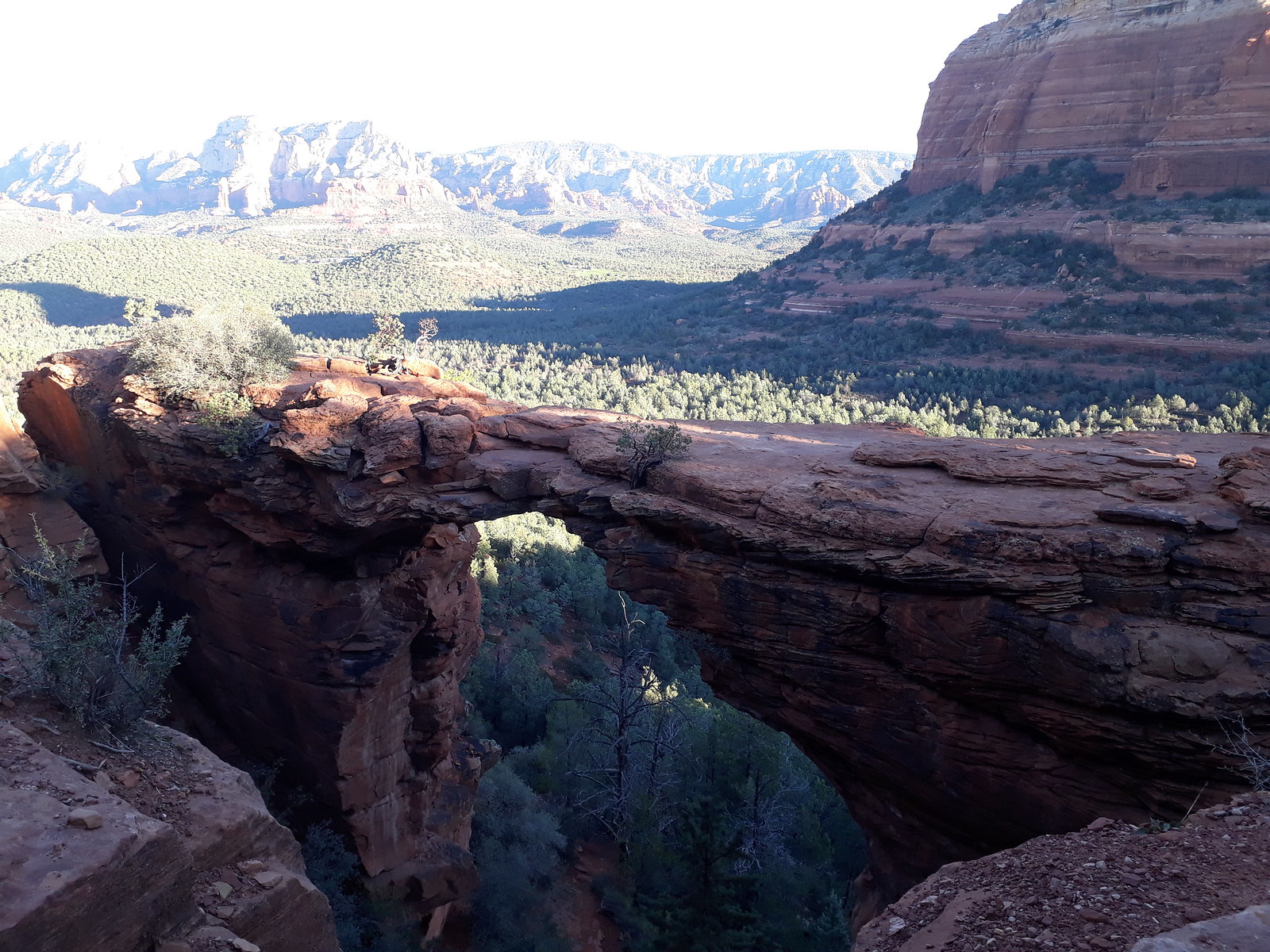 After our photos and a bit of rest to admire the bridge, we headed back to the Mescal Trailhead. From there, we headed a half-mile north to the Long Canyon Trailhead, where we did a 4-mile roundtrip hike to the Birthing Cave. It’s an unmarked trail, but as there were people coming from the hike, we didn’t get lost and we made it easily over in about 30 minutes. I found the climb up to the site even steeper than the Devil’s Bridge, but it wasn’t anything impossible. 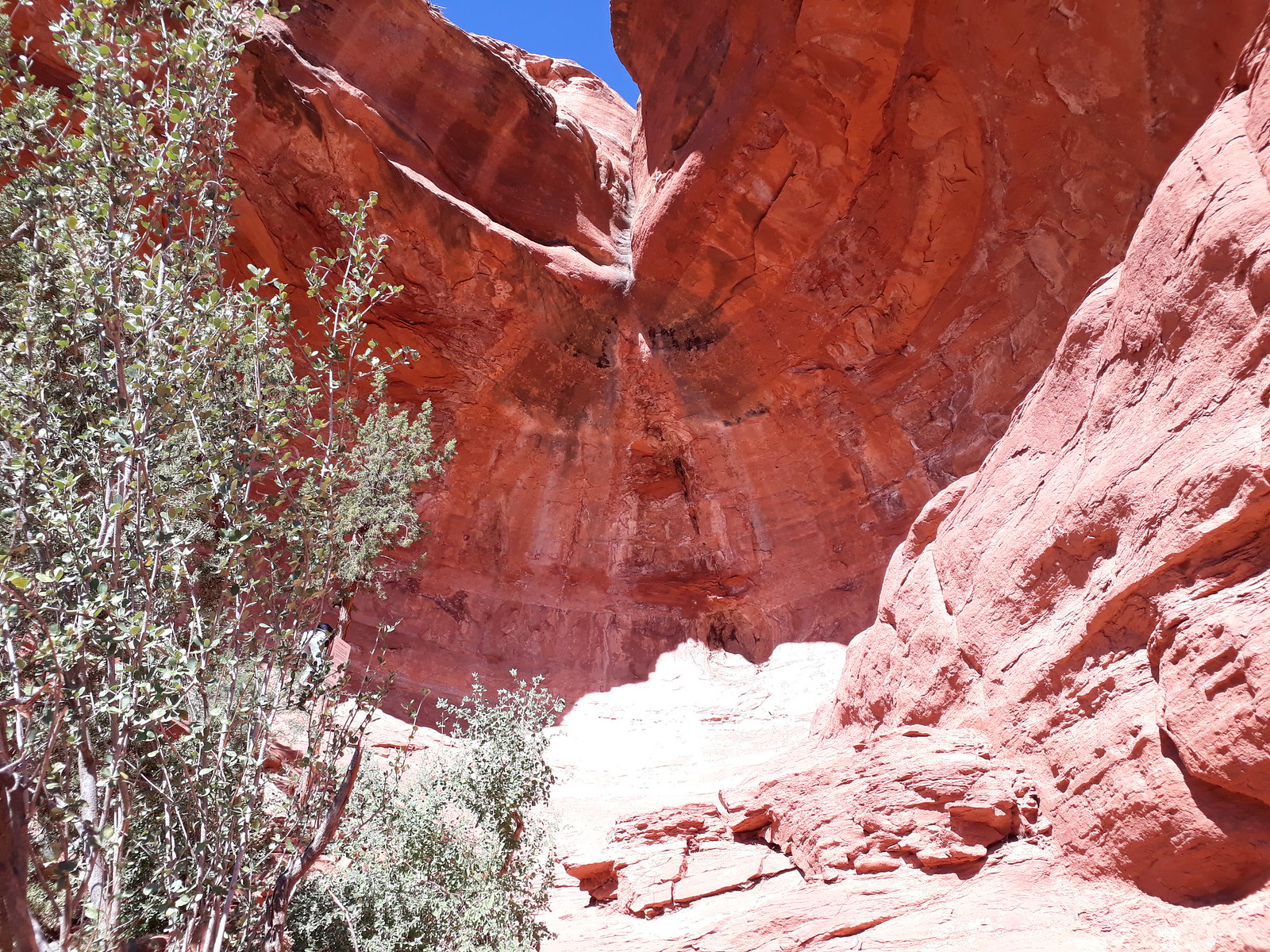 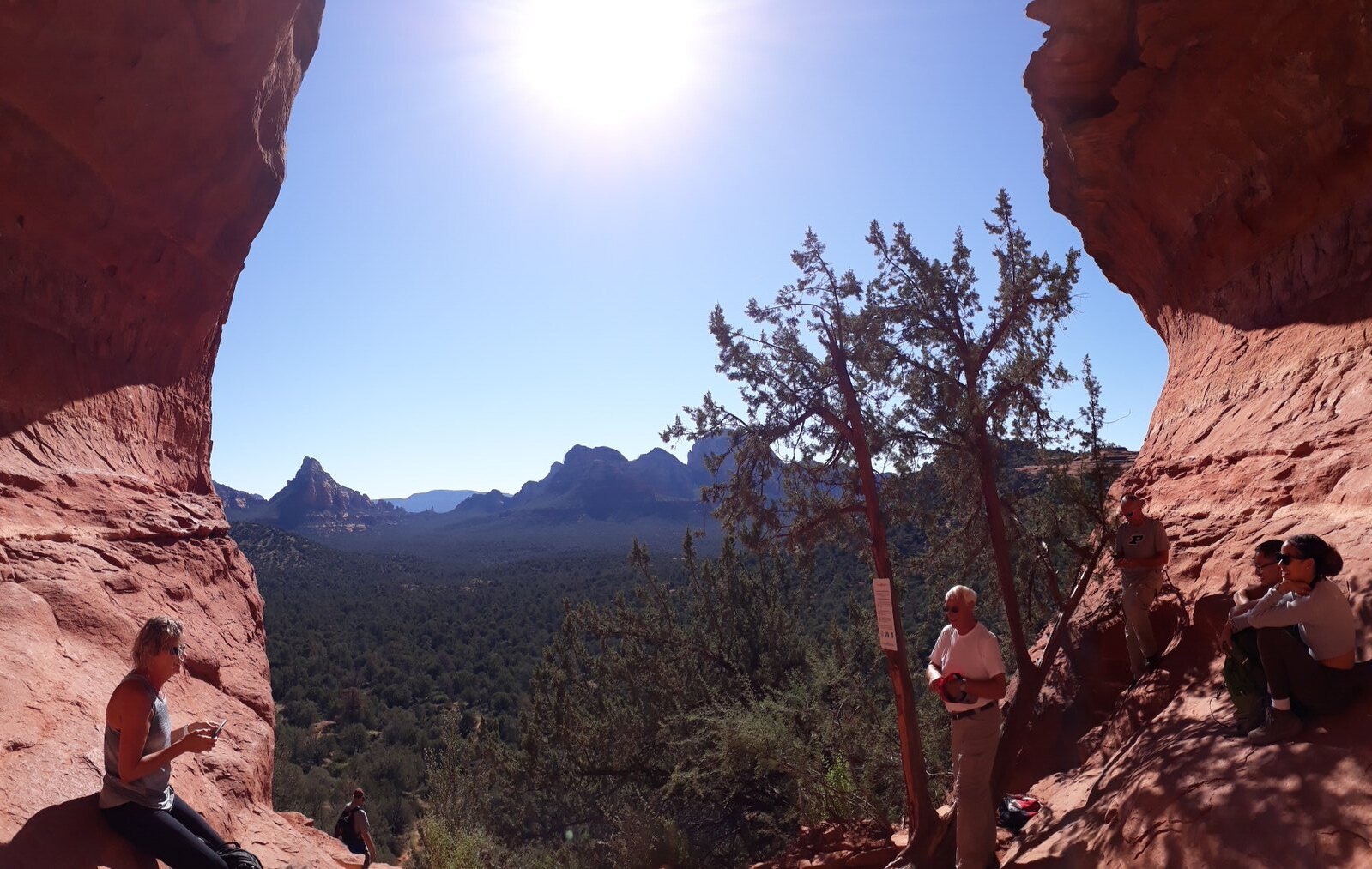 Inside the Birthing Cave

The Birthing Cave is smaller than it appears in photos– in fact, it’s more of a dent in a cliff than an actual cave. It gets its name from its opening, which is shaped as, *erm* the body part where one gives birth. It was a bit tricky trying to find footing inside to walk and sit down, as it’s on a slope, but the valley views were spectacular. It was also very hot by that time of day, so we didn’t stay too long before heading back to our car (still parked at the Mescal Trailhead) and returning to town. Along the way, tons of cars were parked alongside the road, which we assumed were for the Devil’s Bridge hike. It was unbelievable, and I can’t imagine how bad the foot traffic must be to hike over– good thing we went extremely early!

Back in town, we got lunch at a saloon-style restaurant. We opted for burgers: I got a bison burger with sweet potato fries and a prickly pear mojito. Food was okay: the bison burger was cooked medium, but it still tasted a bit tough. I didn’t taste any prickly pear in my drink at all– just the minty mojito. It was also not very affordable at almost $100/person (including a sad-looking salad we took to-go), so it was overall a sub-par meal. 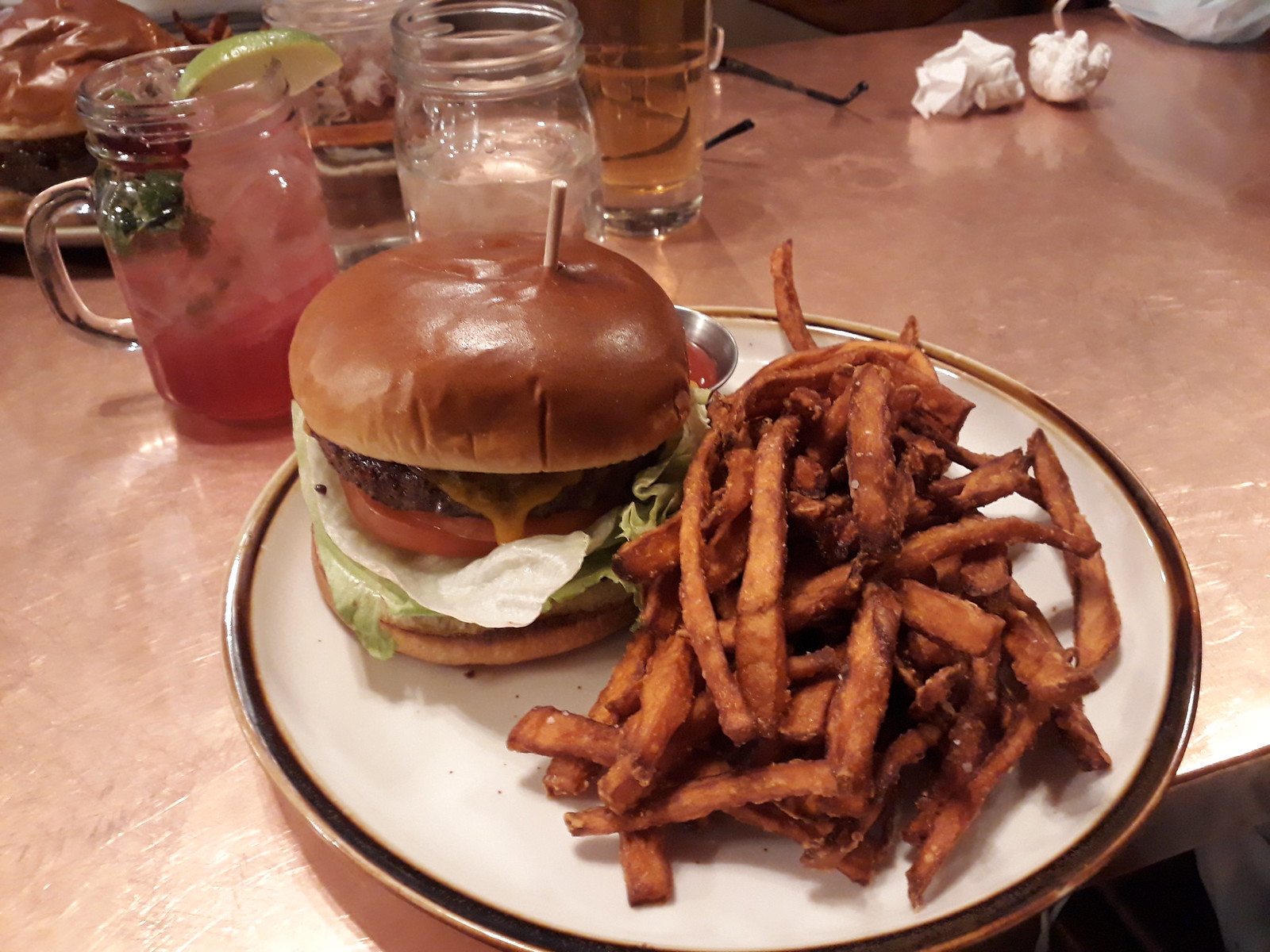 We checked out the Coffee Pot Rock as our last stop before we returned to our hotel by 14:00, choosing to rest for the remainder of the day as we’d woken up super early and were exhausted from the 9-10 miles of hiking we did that day. It would be our last day in Sedona before we headed to our next adventure on the road trip. 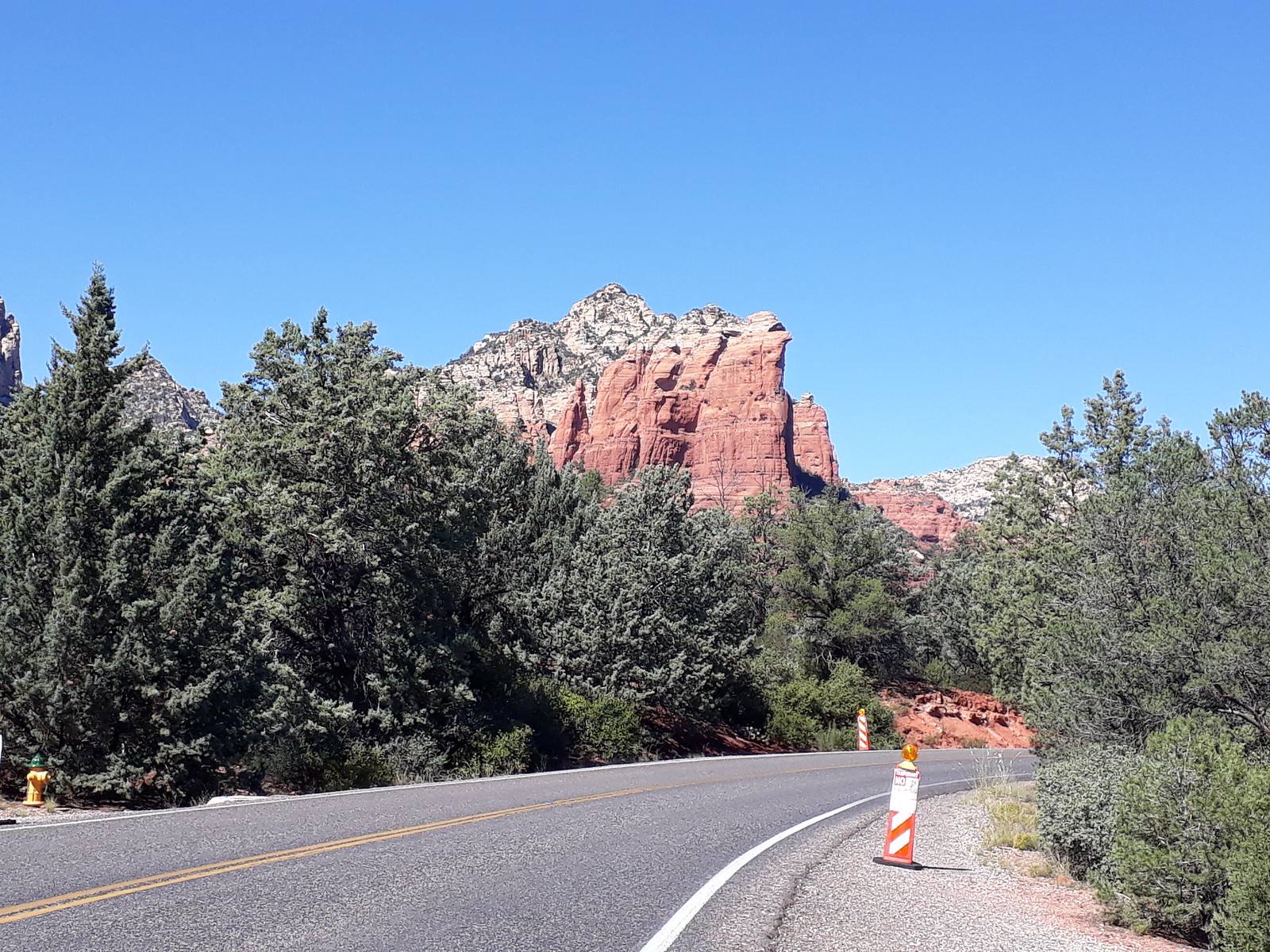 Overall, Sedona was a solid introduction to the natural sites and hikes we would be doing for the rest of the week. Definitely a wondrous place in the heart of Arizona, with so many unique red rock formations that kept your imagination running. I would’ve loved to have done the Subway Cave hike, but as that was a hefty 7-mile hike (especially after the moderately-difficult Devil’s Bridge), we decided to forgo that and do the Birthing Cave instead. I will have to return to Sedona someday to complete that hike!

Thanks for reading– more coming soon!