Last time I baked, it was almost a year ago while I was still unemployed and at home during the pandemic. Since starting a job and otherwise getting busier with life, I haven’t had the time and energy to bake until just a couple of weeks ago, when I decided to try my hand at a Russian honey cake.

Also known as “medovik,” it’s a dense, layered cake made from, of course, honey and plenty of sour cream. I’ve had this cake on my travels in the Czech Republic, Latvia, and Turkey (but funny enough, never in Russia) and fell in love with it to want to recreate it at home. The recipe itself isn’t hard, but it is time-consuming, so patience is key!

I found this simple recipe and followed it to a T, and I believe it yielded pretty-good results. I’ve gone for two attempts: the first one (with strawberries) didn’t turn out bad, but the layers were too thick as I didn’t roll them out thinly enough. 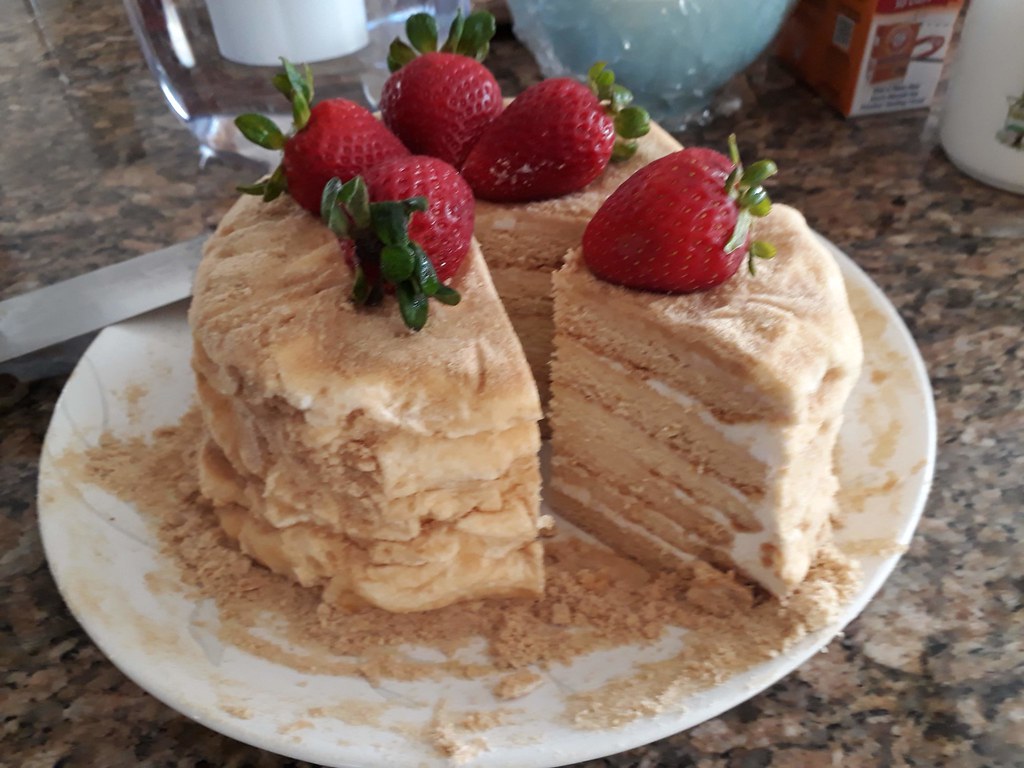 Second time around (with cherries) was much more successful, with thinner layers with a 1:1 ratio with the sour cream frosting. Rolling out the dough was the most-challenging part, that’s for sure: I definitely built up arm muscles at the end of it! 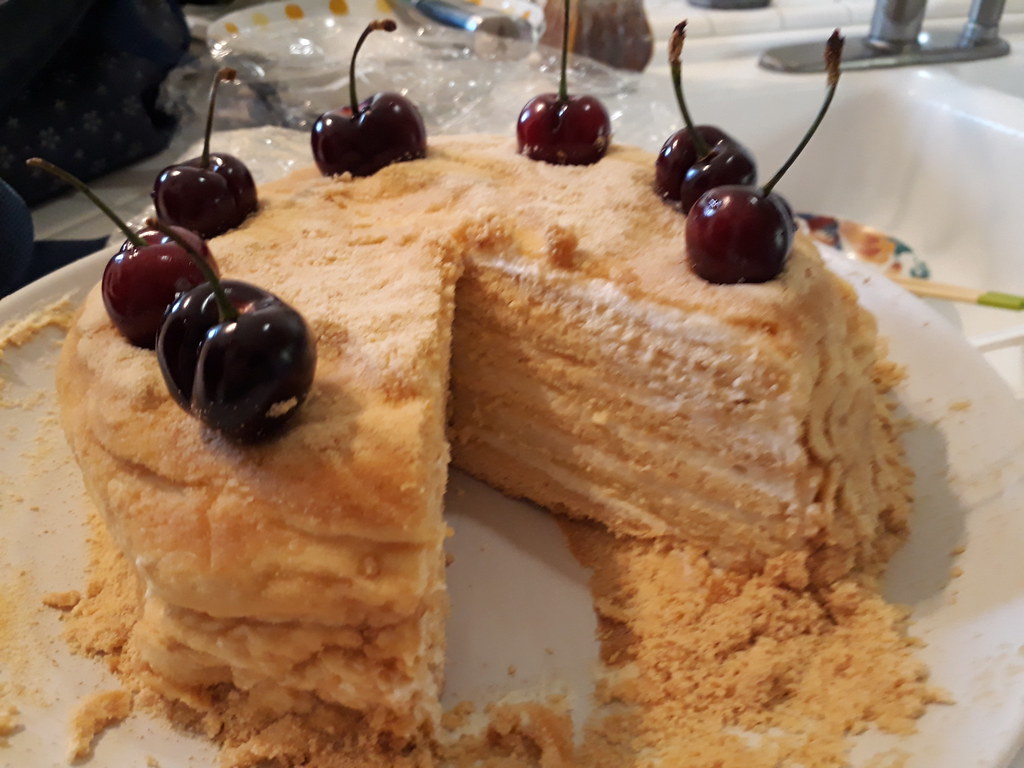 Without further ado, I present to you my version of the Russian honey cake:

Russian Honey Cake, or “Medovik” (makes two 7-8” round cakes, or about eight, generous slices each)

Add honey, sugar, and butter to a saucepan and heat on low, stirring occasionally until the sugar melts down into a thick, almost caramel-like sauce. Remove from heat and briskly whisk the eggs one-by-one until incorporate. Make sure to whisk quickly so that the eggs do not scramble and cook from the heat.

Whisk in baking soda and fold in the flour little-by-little until it becomes a Play-doh consistency. Turn out the dough on a floured surface and cut into eight, equal pieces.

Roll out one of the dough pieces until it’s very thin, almost translucent. Using a plate or pie tin, trace the outline and cut out the circle for a layer. Keep the scrapes for later. Repeat until you have about 8-12 layers.

Preheat oven to 350°F. Bake two to three layers at a time for about 5-7 minutes or until they’re lightly golden brown. Transfer to a plate or rack and let them completely cool before frosting.

Bake the scrapes for about 5-7 minutes or until golden brown. Use a blender or food processor to break them up into fine crumbs. Save for sprinkling on top of cake later.

Using an electric mixer, beat the whipping cream on on medium-high for about 2-3 minutes until stiff peaks form. In a separate bowl, mix together sour cream and powdered sugar and fold into beaten whipping cream.

Spread a generous dollop of sour cream frosting on top of each layer. Don’t skimp, as you need to have the frosting soften the cake. Press down firmly between each layer. Depending on how many layers you made, you can make two cakes (about six layers each), as I had done!

Cover the top and sides of the cake layers with frosting, using a butter knife (or a frosting spatula, if you have one) to smooth out the edges. Dust the cake with the pulsed crumbs on top and the sides (warning: it can get messy!).

Place plastic wrap over the cake and place in the refrigerator to chill overnight. Decorate cake with fresh fruit (strawberries, cherries, etc.) prior to serving. Enjoy!