With my trip to France coming up very soon, I decided to share with you my list of places that I would like to visit in Europe while abroad. I have been planning which cities that I intend to check out, ever since I received my acceptance letter in April to teach abroad in France for the upcoming academic school year.

Before I whisk you off into Euro-world, though, a couple of things:

1) While it’s true that I will have a job (aka working) in France, the hours are not long (at all!) and on top of that, I have discovered that I will have eight weeks worth of vacation! That amounts to two months of travel! Who wouldn’t want to take the opportunity? 🙂

2) The bucket list that you will see below is by no means a comprehensive take on every single place that I plan to visit. I am especially excluding those in the northwest region of France: not that I don’t want to go there (not at all!), but I have written a post which I list places I want to visit in northern France on my French blog. Look out for it soon!

1) London, England– Okay, I was at Heathrow Airport for a layover couple of years ago, but that doesn’t count! In any case, I definitely want to check out the big attractions like Big Ben, Westminster Abbey, and the Buckingham Palace, but also places like Keats House, a museum which once was renown poet John Keats’s home.

2) Canterbury, England– Now, this is pertinent to all of England, but as a post-grad English major, how have I not visited the country?! Especially when it’s so rich with literature history? Canterbury is no exception, as it’s the place where Chaucer’s The Canterbury Tales was inspired. I find it fascinating that there’s just so much history behind the city- tracing all the way back to the medieval times!

3) Dover, England– I didn’t hear about this place until after I had read King Lear (again, for the English major), but afterwards I was smitten by the white cliffs along the coastline of southeastern England. Plus, it’s also a docking place from Calais, France, so it should be no problem for me just to hop on over from the country! 🙂 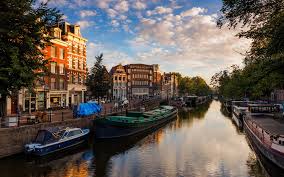 4) Amsterdam, the Netherlands– A friend once told me that Amsterdam is notorious for being “devastatingly beautiful.” And from what I have seen on Tumblr, I have to agree. God, how can a capital city appear so gorgeous, being urban and nature-esque at the same time? Plus, Dutch people are beautiful. Perhaps if I go, I would plan to check out the Anne Frank House, as well as the Van Gogh Museum and the historic canals. Yes, it’s touristy, but why not?

5) Vienna, Austria– As a pianist, I grew up playing many famous composers’ works, many of which came from Austria: Mozart, Beethoven, Schubert, Haydn, etc. And for those of you psychologists out there, you’ll have to thank Vienna for giving psychoanalyst Sigmund Freud his big break. Being both rich in music and philosophy, this city sounds like a place worth seeing.

6) Ghent, Belgium– Forget Brussels (well, maybe not), but I’ve seen so many photos of Ghent on Tumblr that I have fallen in love with the city- before even going there! The architecture is just amazing, with old city centers dating back centuries. It’s the second-largest city in Belgium, and considering that it’s in the Flemish region, it greatly resembles the Netherlands, if not Amsterdam.

7) Lyon, France– Since I will be situated in France, why not make the effort to go out and explore the rest of the country? The third-largest city in France, Lyon is situated just about between Paris and Marseille, and is the commercial hub for its region in the Rhône-Alpes. Its gastronomy is known to be excellent, but I’ll have to be the judge of that! 😉

8) Bordeaux, France– I am sure that, when people first think of Bordeaux, they think of wine (at least, I do). It’s true, though: the city is the world’s wine industry capital, producing famous wines like Cabernet Sauvignon, Merlot, and Sauvignon blanc. I enjoy wine, more so than any other alcohol, so Bordeaux seems like the best place for me to go wine-tasting! 9) Marseille, France– While I have been to Nice, I have yet to visit Marseille, another coastal city along the Mediterranean. Not only is the place famous for its gorgeous views of the sea, but also is known for its savon de Marseille, a traditional soap made from vegetable oil and its calanques, which are steep valleys made of limestone and other minerals along the Mediterranean coast. Although I’ll be far from the southern coast, should be worth a visit, eh?

10) Prague, Czech Republic– Like Amsterdam, I’ve mentioned countless of times on my blog that I also want to visit Prague. Once again, I blame Tumblr for making me fall in love with the city’s architecture. 😛 Blending the old with the new, Prague sounds like a quaint place to go check out in Eastern Europe.

Now again, it’s not guaranteed that I will definitely hit these cities when I’m abroad. But I would really like to, and will take the chance to book train tickets, cheap flights, and affordable housing as means of visiting them all! Only the future will know. 🙂